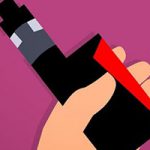 There are hundreds of e-cigarette brands on the market, and they are now the most commonly used tobacco products among youth. Middle and high school students are increasingly using these battery-operated devices, often marketed as a healthier alternative to traditional cigarettes, to inhale nicotine, THC and various synthetic chemicals.

And that has health officials  worried.

Inhaling liquid nicotine is concerning on its own, but vaping unknown and potentially more dangerous and damaging substances is even more so, they say – and parents need to be on the alert.

Vaping: What is it?

Vaping is the “act of inhaling and exhaling the aerosol, often referred to as vapor, produced by an e-cigarette or similar device,” according to the National Center on Addiction and Substance Abuse (NCASA).

Vaping has become more popular among teens than regular cigarettes, especially since vaping devices can be used to inhale flavored substances – such as mint, crème brûlée and mango – and substances that contain nicotine or THC, the chemical compound in marijuana that produces the high.

E-cigarettes also can be used to vaporize opiates and synthetic substances.

Many e-cigarettes and vaping devices look like everyday items – such as pens, asthma inhalers, iPods and lipstick tubes – which makes it easy to disguise their use. One popular vaping device is the Juul vaporizer, which looks like a USB flash drive and can be charged by plugging it into a laptop.

The Juul is small enough to conceal inside an enclosed hand and comes in eight different kid-appealing flavors. Packaging designs for some vaping liquids look a lot like popular candies, which could confuse some children and lead to accidental poisonings.

Some people claim that vaping is less harmful than smoking, but “safer” does not equal safe. Nicotine – in any form – is a highly addictive drug. Teenage years are critical to brain development, which continues into adulthood. Vaping over a long period of time puts individuals at risk for negative long term effects, including:

What are the risks associated with vaping?

While researchers are still learning about the effects of e-cigarettes, some dangers are clear, according to the U.S. Centers for Disease Control, and include:

Many teens and adults are under the impression that it’s safe to inhale nicotine-free water vapors, but recent studies say otherwise.

Much of the respiratory risk appears to come from the flavoring agents found in some e-cigarettes, according to the U.S. Food and Drug Administration. When inhaled, these flavoring agents can cause “popcorn lung” – a scarring of the tiny air sacs in the lungs that results in the thickening and narrowing of airways. Popcorn lung mirrors the symptoms of chronic obstructive pulmonary disease (COPD), including wheezing, coughing and shortness of breath.

The U.S. Centers for Disease Control and Prevention says e-cigarettes are not safe for young adults. Some of the risk comes from the aerosol itself, which can contain lead, volatile organic compounds and cancer-causing agents.

Are there any regulations to protect my children?

Currently, there are no safety regulations in place related to e-cigarettes. The FDA states that minors are not permitted to buy e-cigarettes in stores or online, but that doesn’t prevent an underage person from buying them online by simply clicking a button that says they are 21 or older.

In New York, e-cigarettes are treated the same as regular cigarettes. Vaping is banned in all public spaces, including bars and restaurants, the workplace, on public transportation, inside all public and private schools and colleges, and in outdoor areas where smoking is forbidden.

Half of middle school students who use e-cigarettes say they were the first type of tobacco product they ever used.
Source: NCASA

More than 60 percent of teens believe occasional use of e-cigarettes causes only little or some harm.
Source: U.S. Surgeon General

What can parents do?

Find information about vaping and how to talk with your children about the risks here: